A downloadable game for Windows

Hojiya is a 2D adventure platformer in a coastal fantasy world, where the daylight will be crucial for our plant boy protagonist.

Nogaru and Iara are two brave siblings, will explore forest, jungles, and deserts; by collecting artifacts, challenging cunning creatures, and defeating perilous villains, will find their origins, in this emotive adventure throughout marvelous lands, to uncover the fate of a lost culture.

Solve mysteries, help people to save their islands of the impending doom caused by the evil corporation Xiphos.

A lot of Items to search,collect and trade!

and meet the people of this world

If you play the zip version, please extract the zip to play it

I can't choose my language.

but gameplays is verry funny.

I love this game, you clearly put lots of effort into it

Pretty fun, but I can't pick up items on the beach

But there are some bugs that I experienced, like when the game changes scenes sometimes the character movement and the birds (for example) slows down. this is the only bug that I experienced can you please fix it?

really nice game, like it.
too bad that it doesnt auto save though.

like if I collect some super important item, cant it make an autosave or something?

or an autosave if I croos the border between one of the 3 main areas?

not to forget: after boss fights! :-)

Also, would be nice if the game had less consumables and more permanent stuff.

you know, some secret stuff, behind hidden puzzles and stuff.
just like that cave in the sea area I just came to realize that I never went back there acctually O_o)

the sound it makes when someone talks is horrendous, dunno if you were trying to make it like undertale but it really sucks man

Loved the game! Is there any chance I can ask for the color palette you used here?

Is the full game going to be free?

How do you save the game?

Hey! I love the game though I'm stuck at the Ancient Cave quest because I can't find it. Help?

in the forest, go right from where the guys blocked the way beforehand. (when you collected sap and stuff).
move fiurther right until youa re back at *MC's friend*'s house, pushing the box to the site.
literally the next screen left, at the bottom right.
that's where the cave is.
literally 1 screen left of the friend with her bar.

I already found it a while ago, sorry

i'm very glad you liked it, thanks for your support!!!

Really lovely game! Enjoying so far thanks and well done!

One minor bug found, when first talking to Ginger the text overruns the box slightly.

thanks for your report and for your support!!!

i can't answer you in Portuguese but thanks for your support !! I'm working on bugs continuously

A bug is that if you use a return stone in the ancient cave, the health bar disappears, as do the characters and the game becomes unresponsive.

i'm going to review this bug, thanks for your support!!!

I love the ambiance of the game, was really relaxing!

i'm trying to replicate the ambiance from some important places in my life so i'm very glad you felt good!!! thanks for your support!!

Really great atmosphere and graphics! It would be awesome to have a full game looking at this demo.

thank you so much!!! i'm working really hard for it :D

Hello there. Love the color and the art work!

Are there any minimum system requirements as a must?

I wanna try it but my PC is really, really, seriously(it's running Win7 lol) old, sadly... And even though I want to play the alpha so badly, I don't want to ruin my PC T__T

hey thanks for your comments!! for now there're no minimum requirements because as an alpha i have not fully tested it but i can say for sure that it wont make your pc explode so dont worry. In the worst case, your game will be lag a bit because some shaders but that's all so try it and let me know how it goes :D Thanks for your support!!!

Is there any way to manually save the game, while not near a save post?

no, the only way you can save your progress is being near a save post so be sure to say hi to the post birds :D

I found the bug! After taking picture of door in the cave my health bar vanished. Here's the screenshot: 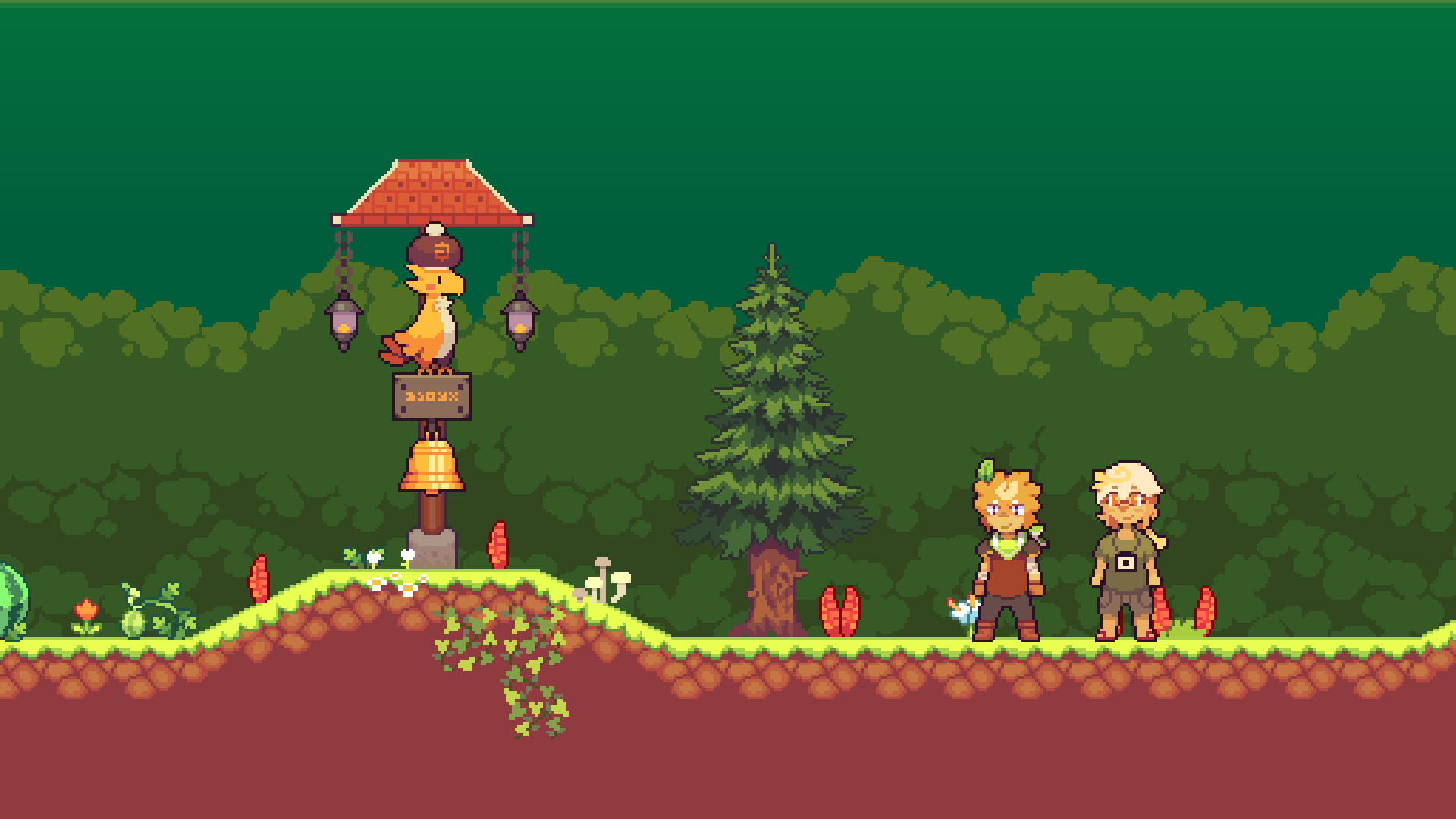 Thanks for reporting this bug, i'll try to find the source. Thanks for your support!!

when I try to run the game it works fine and every thing but i cant choose my language when I click English it just stays on that screen so i cant get in to the game could I get so e help?

Can I play as Lara?

The only slight sort of issue is in some of the English text, where some words are incorrect or some sentences just seem a bit weird, although you can still understand what it means/is supposed to be.

I also must say that the art style is just beautifull, props to the person who made it.

hey, thanks for your comments!!
i know about the english issues, actually i'm not english native so i hope when i start the full development of the game fix them with a proper translator.

also, i'm both the artist and the programmer so thank you so much!!

What An Amazing Game I really wish to hear from the game Developer about what is she/he doing .

Didnt really hear from you for a while

Have a great day :D

i've been working on the game and some other surprises for a better gaming experience :D
Sadly, i'm a little stuck because my pc is being repaired :(
thank you so much for your support and have a nice day too!!!

Is there a chance that this game can be ported to Android?

this game is planned to be released on pc and i hope on consoles but not to android for now, sorry :(

Is it just alpha?

it's just an alpha, I'm still working on the game :)

Waaait.... Will this have a daylight sensor???

this game is just beautiful

excellent game that i can see going very far. excellent work on the sprite artwork, character designs, writing, music, and UI. a few nitpicks like the jump feeling too heavy, etc. but very impressive work. i wish the game's future development well!

Will this game be available also on Steam

I loved the game, and was really into it! There was a few small nitpicks I noticed here and there, but overall it was a seriously great game! So nitpicks... Ginger's hair colours are flipped on the world sprite and talking sprite. I managed to give ginger the fish before she said she needed the fish, and afterwards the quest menu said I still needed fish. Quest still worked fine tho. I also noticed a treasure chest in the fishing minigame, but couldn't do that again after collecting the fish. Would've been nice if I could have had a few more attempts at fishing. Healing at save points was very inconsistent, sometimes you got healed, and sometimes you didn't. Not sure if there was some mechanic I was missing, but whenever a save spot didn't heal me, I quit to the menu and loaded the save with full health. When I was looking for the ancient cave the first time, I found it, and wanted to explore ahead before checking out the cave. I then found that the world loops, and I couldn't get back to where I was without traversing the whole world again, just to get to the cave for a quick cutscene. Also, this ancient cave place was super hard, the first few rooms were crazy dense with new and weird enemies, that made this place brutal. I eventually did get through, but on so little health, that I spent fifteen minutes farming rotten (healing fruits, don't remember their names) from the scaredy bat.

Anyways, they are all little nitpicks, I loved the demo, and really want more. That 'thanks for playing' hurt a bit, cos I really wanted to see what was gonna happen...

Nice artwork, and pleasant music. But maybe I'm just too bad at games. Here are some of my personal suggestions, hope you don't mind:

1. After you get key items, you can't move or do anything. I personally think the time for that is a little bit too long. Would be better if he does some gesture or just let the player do whatever he want to.

2. The brown insect enemy that emerges from the wood or ground, it's quite hard to predict their action while sometimes I try to jump over them ending up landing right on them. Some dirt or rubble splashing would be great. And also, even when it hides into the wood or ground, you can still hit it at horizontal level, not sure if that's on purpose.

3. Some spelling errors, like tourist, touristic are all missing an o at the beginning, which end up being turist, turistic. And I forgot where it is exactly, before or after Nogaru collected all the ingredients for the dessert, Iara said "Any excuse to explore the island" or something like that. This one I'm not so sure if it should be "any excuse" or "a good reason". Maybe there are some others but I am not quite a native English speaker so...

4. Before fighting the drill when Iara get trapped in the machine, or any other big fights yet to come in the following story, I think there should be a checkpoint or the bird stand. And also, that the game ends when I die really annoys me, even if that's because I suck at games. Or maybe I can save by taking photos and I just didn't know?

5. Sometimes, you just get damaged and knocked back onto a booby trap and then activate it and get knocked back onto it again, which is kinda annoying as well... Or maybe I should just avoid getting damaged in the first place.

6. I was firstly shocked when I saw Nogaru shooting something from his bare hands. Like, why? What's the background story? Is this a dimension where magic exists? Is it better if he could use a toy gun or something? And Iara, her only things to do in this game seem to be taking photos, and get caught. Well, I think she can at least try to pick up those coins.

7. And this one is really personal. What's an tropical island without hunky muscle guys, or beautiful bodies? Haha. This is just my personal interest. So... you can ignore it.

Well, so far so many I guess, sorry for so many "personal" suggestions. Developing games can be really hard, and I think you are doing a great job.

Thanks for playing the game! , the feedback is always good, we are working on some fixes, among them several elements that you mentioned :D

I have big expectation of this game, but no matter what comes out of this I know it will be great :3

Keep up the good work!

The release of the demo will be in December!